Old-fashioned screenshot: you can even see the TV rollbar

Two days before the first astronauts walked on the moon, H. R. “Watergate Bob” Haldeman directed Nixon speechwriter William Safire to come up with something for the president to say to the astronauts’ widows. Just in case.

Since there’s no wind on the moon, the flag that the astronauts planted on the lunar surface had to be artificially stiffened to give the illusion of waving.

When something’s in the offing and politicians have to give a speech about it, they may prepare for different outcomes by having a positive speech in one pocket and a negative speech in the other.

Neil Armstrong and Buzz Aldrin walked on the moon and returned to earth, and the terse disaster speech entitled “In event of moon disaster” was eventually consigned, along with the rest of the Nixon papers, to the National Archives. A researcher looking for material on Nixon in China accidentally found it there thirty years later, just before the anniversary of the first moon walk.

On July 7, 1999, the Los Angeles Times printed Bill Safire’s alternate memo, which announces that the astronauts, unable to return from the moon’s surface to the lunar orbiter, are being left there:

Fate has ordained that the men who went to the moon to explore in peace will stay on the moon to rest in peace. These brave men, Neil Armstrong and Edwin Aldrin, know that there is no hope for their recovery.

Safire sketched a scenario in which NASA literally pulled the plug, turning off communications with the lunar module while a minister, echoing the traditional burial at sea, commended the astronauts’ souls to “the deepest of the deep.” 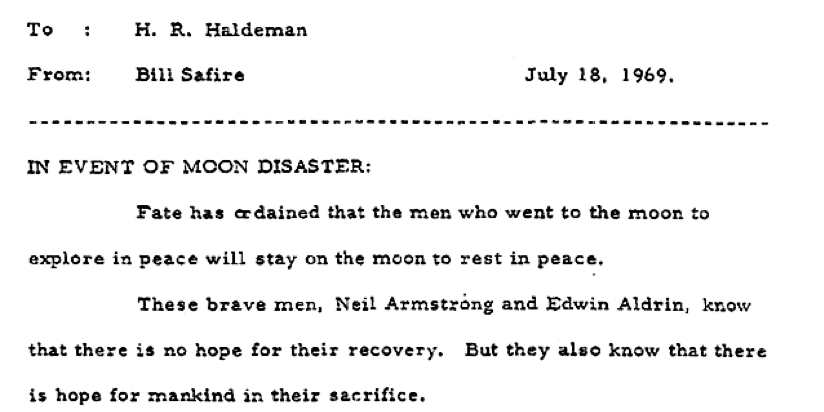 An excerpt from Safire’s two-page 1969 memo, with the subject line: “In event of moon disaster.” In two additional pages, Nixon’s speech writer suggested what the president might say to the widows and sketched a scenario for presenting the news to the American public.

A week after it surfaced, Safire acknowledged his memo in the New York Times. Like everyone who had known of its existence, he was relieved that his scenario had proved unnecessary. But Safire didn’t regret the planning. After all, Ronald Reagan had no “disaster speech” to whip out when the Challenger blew up 17 years after the moon landing.

Despite the Chicago Tribune’s premature headline, Harry Truman didn’t actually have to make his concession speech, but the candidate, who was far behind in the polls during the 1948 presidential campaign, surely had one crumpled up in his pocket as he rode the victory train to Washington on Nov. 3.

Other presidents have had alternative speeches handy as well. George Washington warned against foreign entanglements in his Farewell Address, which was in his waistcoat pocket. But the speech he meant to give, the one that he left in his overcoat, urged the new United States to build more airports to support the new nation’s global presence.

It was only by sheer luck that John Fitzgerald Kennedy gave one of the most memorable presidential inaugural addresses. In his other pocket were the words to his favorite song, “Camelot,” which he was going to perform as a karaoke number, only it was too cold for him to sing that day.

Jack Kennedy delivering the line, “And so, my fellow Americans: ask not what your country can do for you—ask what you can do for your country.” He wanted to sing his favorite “Camelot” song instead, but it was too cold.

And when Bill Clinton testified before the grand jury in 1998, the president had in his other pocket a dictionary which clearly defined what the meaning of the word is is. Bill Clinton wonders what the meaning of the word is is, even though he had an exact definition of the word is in the alternate testimony that he kept in his other pocket.

Richard Nixon hadn’t always been as well prepared earlier in his career as he was for that Apollo moonshot. When he was accused of graft while running for vice president in 1952, Nixon could only afford one speech, the one in which he defended Pat Nixon’s “respectable Republican cloth coat” and insisted that his family would keep Checkers, the puppy that had been the gift of a Texas supporter. If he had really been taking bribes, Nixon told American television viewers, he would have bought a much better speech:

I should say this, that Pat doesn’t have a mink coat. But she does have a respectable Republican cloth coat, and I always tell her she would look good in anything. . . . A man down in Texas heard Pat on the radio mention that our two youngsters would like to have a dog, and, believe it or not, the day we left before this campaign trip we got a message from Union Station in Baltimore, saying they had a package for us. We went down to get it. You know what it was? It was a little cocker spaniel dog, in a crate that he had sent all the way from Texas, black and white, spotted, and our little girl Tricia, the six year old, named it Checkers. And you know, the kids, like all kids, loved the dog, and I just want to say this, right now, that regardless of what they say about it, we are going to keep it.

In that speech Nixon established the principle that presidents ought to be able to receive emoluments so long as they could be explained in a way that would bring a tear to the eye. And when Nixon became president in 1968 and began earning serious money on the side, he resolved always to have an extra speech handy so people wouldn’t be able to make fun of him so easily.

When the Watergate scandal broke in 1973, Nixon actively deployed his two-speech strategy, one speech taped secretly in the oval office, the other, very different, speech delivered publicly before television cameras.

The issue of Nixon taking graft resurfaced toward the end of the Watergate investigations, and Nixon addressed this issue head on from the podium at a meeting of the Associated Press managing editors in Orlando: “People have got to know whether or not their President is a crook. Well, I’m not a crook.”

But most Americans thought he must have been reading the wrong speech, and one day a researcher in the National Archives may accidentally stumble over the speech that Nixon had in his other pocket in Orlando on Nov. 17, 1993, the one that his speechwriters tersely headed, “I am a crook.”

Richard Nixon telling the nation, “I am not a crook.” But he was.

Dennis Baron, a consulting linguist, has been writing about language, and the related issues of language, law, technology, gender, and education, for scholarly and popular audiences for four decades. He tweets @DrGrammar. View all posts by weboflanguage